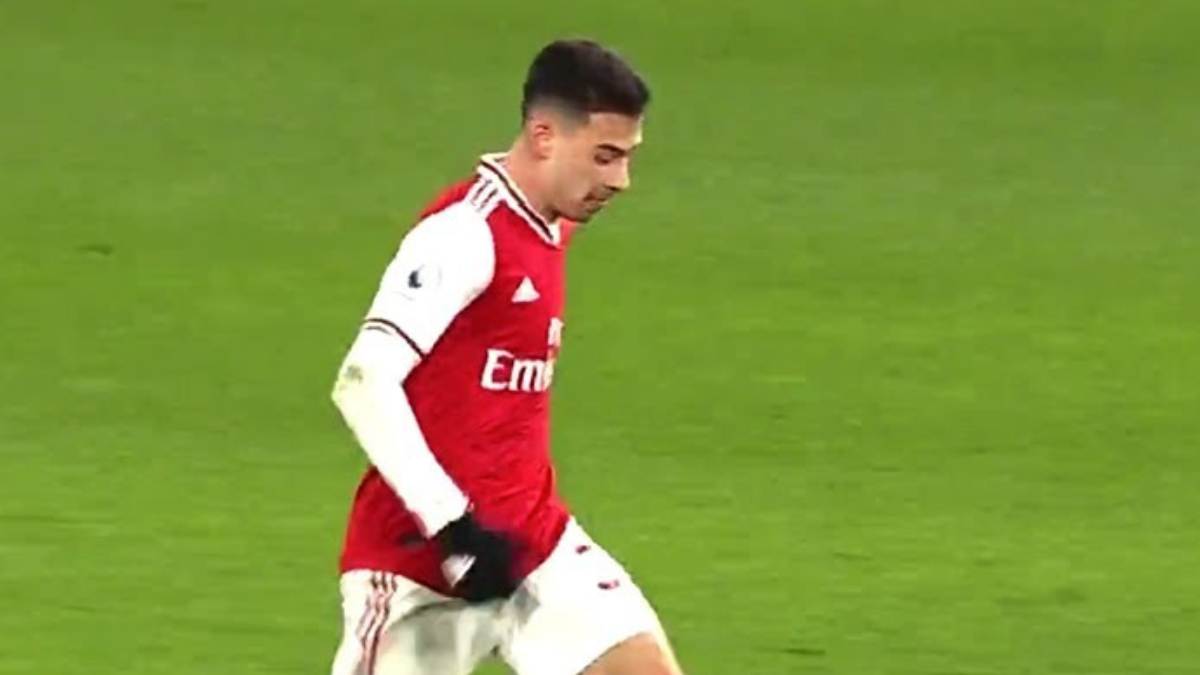 Arsenal are fighting for a top-four finish this season, which none expected them to. Moreover, the Gunners are fighting their battle with the youngest squad in the Premier League. But Arsenal are reaping rewards for trusting these youngsters. The club started clearing out the old men in the job, and recruited teenagers and youngsters who were yet to hit their prime, and were mostly unknown to the footballing world. One such player with whom Arsenal have hit ‘gold’ is Gabriel Martinelli.

Martinelli has become an integral part of this Arsenal side since joining them in 2019. Moreover, the 20-year-old has shown booming signs of improvement under Mikel Arteta. At just 20, Martinelli already has 80 games under his belt for the Gunners over the last three seasons. His game-time has only experienced a rise as the seasons have passed. Further on, the Brazilian has responded to the call as well, tallying 28 goal contributions [17 goals, 11 assists] in those 80 appearances.

Arsenal is spot on in recruiting Martinelli

Arsenal have to give credit to their recruiters in Brazil who unearthed Gabriel Martinelli. A teenager at the time, Martinelli played for fourth-tier side Ituano in Brazil. Club scout Johnathan Vidalle spotted Martinelli and was immediately impressed with him. His agility, pace and confidence on the ball at such young age prompted Vidalle to persuade Arsenal to sign him. The Gunners wasted no time and acquired him for £6.3 million.

The fee was deemed as quite a gamble given Martinelli was not even playing in the first tier. But Arsenal’s gamble seems to have worked out with positive results. Martinelli made a scintillating start to his Arsenal career, scoring a brace on his full debut while taking no time to settle. Though it came against Nottingham Forest in the League Cup, Martinelli provided a glimpse of what he can offer to the club. Since then, there’s no looking back for Martinelli who has 25 league appearances this season.

The Brazilian’s only improving for the Gunners

A natural left-winger, Martinelli has flourished in that position for Arsenal. Since joining the North Londoners, Martinelli has played 56 of his 80 games on the left-wing. In that spell, the Brazilian has 9 goals and 7 assists for the Gunners. However, his versatility should not be undermined either. The youngster has abilities to play as a centre-forward as well, scoring 7 and assisting one in 12 games in that position. But his qualities are exploited to their full potential on the left only.

This season, Martinelli has scored 5 and made 4 for Arsenal in 25 league appearances. His abilities such as the sudden burst of pace, and the dynamism he brings to his game has left the defenders dizzy on the floor. Martinelli posts 1.1 key-passes, 1.4 dribbles and attempts almost 2 shots per game. Moreover, the winger amasses 2 shot-creating actions and presses the opponent 11 times per game. Furthermore, his 4.4 touches per game in the opposition’s penalty box are enough to prove that the 20-year-old offers a lot of attacking threats.

Premier League is arguably the most difficult league throughout Europe to play and survive in. In the land where pundits tear you apart for bad displays, Martinelli has rather earned high praises from them. SkySports pundit Graeme Souness has labelled Martinelli “dangerous”, whereas Gary Neville stated that “he’s got a bit of (Robert) Pires about him”. Martinelli is definitely on the right path of becoming one of the best in his position. Meanwhile, it’s Arsenal’s time to enjoy the exploits of their prized asset.